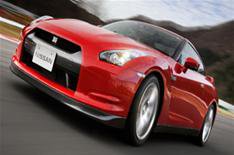 As impressive as the engine performance is the fact that Nissan can still sell the GT-R from 54,000 less than half the price of more prestigiously badged machines with similar performance levels.

No wonder, then, GT-Rs are selling fast and at a profit, too.

Although rival manufacturers have scoffed at the asking price, suggesting the car is being sold at a loss as part of a marketing strategy to promote the Nissan brand, company insiders insist that is not the case.

Over the anticipated six-year lifetime of the GT-R officials say the car will make Nissan a small profit and that's before it has used the car as the basis for spin-off models, with current rumours suggesting a performance Infiniti could be in the offing.

Worldwide demand is far out-stripping supply - one customer from the Middle East is rumoured to have bought 40 cars alone, to give as gifts to his friends - and in the UK the waiting list is already stretching long into 2010.

Given the level of expertise put into building the car and engine, though, that wait is set to get longer and longer and make the GT-R ever-more desirable.