More for you |
Every 5-star car on What Car?Used test: Maserati Levante vs Porsche MacanNew issue of What Car? magazine on sale nowMost and least reliable small SUVsRevealed: the car makers whose discounts have got bigger since lockdown
Home
News
Alfa reveals new 1.8-litre engine
news 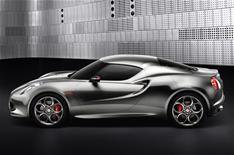 Alfa has announced details of a new 1.8-litre petrol engine, which is expected to provide the power for the 4C sports car.

The turbocharged four-cylinder engine will be built in Italy from early 2013 and will have a maximum power output of 296bhp. It has an all-aluminium construction and will meet Euro 6 emissions standards, which come in to force in January 2015.

The 4C is due to go on sale in early 2013. As well as providing the power for that car, the new engine with lower power outputs - will drive the next generation of Alfa Romeo models, including the replacement for the current 159.