* Computer-generated images * Appeals to style-conscious buyers * Won't be on sale until at least mid-2009... 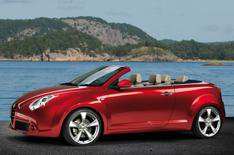 These computer-generated images show how an open-top version of the Alfa Romeo Mi.To supermini could look.

Although Alfa Romeo has only recently revealed the first official picture of the Mi-To hatchback, speculation is already mounting that it will launch an open-topped derivative to appeal to style-conscious buyers.

The hatch will go on sale in the UK in early 2009, with a hot version following later in the year.

That means an open-topped Mi.To is unlikely to go on sale until next summer at the earliest.