More for you |
WATCH: 2020 Tesla Model S Performance – full in-depth reviewThe best new car leasing deals for less than £200 per monthDo I have to pay extra road tax on my new car? Why I bought a Renault Zoe: owner reviewBest used family SUVs for less than £15,000
Home
News
All change behind the wheel
news

All change behind the wheel

* Electric cars will be a reality * Technology is almost here * Political will is strong, too... 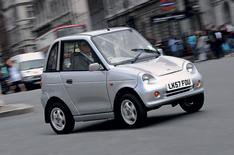 All change behind the wheel
Even so, electric cars will enforce fundamental changes on driving patterns. You'll be lucky to get more than 60 miles out of a full charge compared with 350 or so from the average fossil-fuel car, so we are going to need plug-in points around offices or in public parking areas if our driving is not to be restricted to short commuter trips only.

Renault is proposing a network of drive-in stations where exhausted battery packs can be quickly exchanged for recharged ones.

Then there is cost. In effect, buying an electric car is like paying for the car and most of the fuel you intend to use up front. Battery packs alone can cost $900 (around 600) per kilowatt-hour of capacity, and the average electric car might need 25 kilowatt-hours. Do the maths.

The answer is likely to lie in some form of leasing arrangements. Either you'll buy the car and lease the batteries for a fixed monthly sum, which will replace your normal outgoings on petrol or diesel, or simply lease the whole car.