More for you |
Most and least reliable family carsWhat to do if you put the wrong fuel in your carVolkswagen Passat GTE long-term test reviewNew issue of What Car? magazine on sale nowTrue MPG: most efficient SUVs
Home
News
All-new Camaro drop-top launched
news 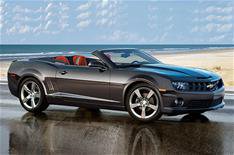 Chevrolet has revealed its all-new Camaro Convertible at the LA motor show.

It will go into production in the US in January 2011, reaching European markets later next year.

The car will be offered in the same configuration as the coupe, with a 6.2-litre V8 engine producing 420bhp.

Drive will be through a six-speed manual gearbox, as standard, while there is also an optional six-speed automatic 'box.

The canvas top retracts electrically in about 20 seconds and is unlatched by a single handle that's positioned at the centre of the windscreen header.

Chevrolet has added additional safety reinforcements in the A-pillars and a reinforced front hinge pillar.

Prices will be revealed closer to the on-sale date.