* Audi reveals Crosslane Coupe in Paris * Hybrid concept car capable of 258mpg * Q2 would be based on A1 supermini... 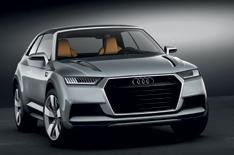 This is the Crosslane Coupe concept car a supermini-based SUV that could preview the Audi Q2 that was revealed at the 2012 Paris motor show.

The Crosslane Coupe is a hybrid, powered by a three-cylinder 1.5 TFSI petrol engine and two electric motors. Audi says the car would return average economy of 258mpg and emit just 26g/km of CO2.

Audi says the Crosslane Coupe gives clues to how future Q models could look. A Q2 would be designed to offer A1 customers the more rugged looks and raised driving position of an SUV, with the compact dimensions and manoeuvrability of a supermini.

The Q2 will be a sister car to the VW Cross Polo, a beefed-up version of the regular hatchback that is not sold in the UK. The Cross Polo gets a slightly raised ride height, and extended black bumpers and wheelarch cladding, however we'd expect the Audi sister car to adopt a more sophisticated body-coloured set-up. The car can be offered with four-wheel drive, allowing the Q2 to be badged a 'quattro'; the Polo chassis on which it will sit has been designed to accommodate this.

While the concept car is a hybrid, the production car's engine line-up should include current A1 engines such as the 1.6 TDI diesel and a choice of 1.4- and 1.6-litre petrols. A 2.0-litre TDI could also be offered although it might have been phased out of the Audi small car line-up by the time the Q2 arrives at the end of 2013.

Volkswagen is also planning a new range of tiny-but-chunky models. Later this autumn the car maker is expected to reveal a baby SUV based on its Up city car; it has already issued strong hints at the new model's styling, via a range of concept cars.