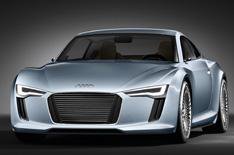 Audi revealed its second vision for an all-electric sports coupe in less than four months at the Detroit motor show.

It has the same name as the model shown at the Frankfurt motor show in September e-tron but this one is mid-engined and develops more than 200bhp and almost 2000lb ft of torque.

'We want the name e-tron to take its place alongside our other iconic brand names like quattro and TDI,' said chief executive Rupert Stadler.

Production car possible
The Detroit car is based on the same mid-engined architecture as the Volkswagen Concept Bluesport, the diesel roadster that was the star of the Detroit show 12 months ago. That means it could easily be put into production if there is a market for it.

'We always said that to make a car like the Concept Bluesport viable for the group, one company could not go it alone,' an Audi insider told us. 'That gives you some idea as to why we have developed this.'

Roadster version could be made
Our source revealed that it would even be possible to make a roadster version of the car with the all-electric drivetrain, even though part of the lithium-ion battery pack is located against the bulkhead immediately behind the driver and passenger.

More batteries are mounted ahead of the front axle, while the car's two electric motors sit over the rear axle.

The car is based around an aluminium skeleton like Audi's TT and R8 coupes, but also includes some carbonfibre sections that help keep its weight down to just 1350 kilos.

It is said to be capable of 0-62mph in less than six seconds, but the top speed is restricted to 124mph to give it a better range on a full charge Audi claims up to 155 miles. It takes 11 hours to charge the batteries fully, or two hours through a high-voltage plug.

Sixty per cent of the car's weight is over the rear wheels, which drive the car, and to ensure good traction there is something called torque vectoring the targeted acceleration of individual wheels which acts a bit like a sports differential.

High-tech kit
There is thermal managing for the climate control system to minimise drain on the battery, active aerodynamics to make the car cut through the air more cleanly and fully automatic lamps which react to different weather conditions and oncoming traffic as well as changing light.

The e-tron is less than four metres long and only 1.2 metres tall. It was designed at Audi's Munich concept-car studios and is said to give clues as to the look of future production models.

The interior has been kept as simple as possible, with a minimum of trim and controls. This has been helped by a development of Audi's central control system (MMI), which for the e-tron has been designed like a smart phone, with a central display of essential information accessed by a touch-pad.