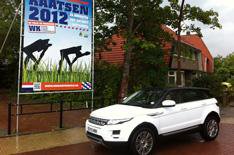 This week, the Evoque and I are in Franeker, Holland, where I am taking part in the CIJB World Handball Championships.

The less said about my performance, the better, but the Evoque has been rather more impressive. Myself and my partner had a few days' holiday ahead of the competition, and the Evoque has been a great car to get us through France and Belgium en route to northern Holland.

After so many motorway miles, we've really come to appreciate the car's high-quality interior, the comfortable seats and the excellent stereo. The sat-nav has been a godsend, too, and we've barely made a dent in the Evoque's luggage capacity.

Overall, I have no more than a couple of complaints: first, the slow-to-react touch-screen is infuriating; and, secondly, I really think the Evoque should be doing more than the 33mpg the trip computer says it is - especially when our driving has been very relaxed.

Filling the tank to find the car has a range of barely 350 miles is not great when you're embarking on a cross-Europe drive.

In fact, that reminds me of another irritation: there are no kph markings on the speedometer, just mph. So, trying to work out my speed at any given moment is rather more taxing than I would really like.

I'm borrowing the Evoque for a couple of weeks' holiday in Holland, where Im playing in the World Kaatsen Championships.

In the meantime, though, we've done little more than potter around the corner of South West London we call home and, sadly, that hasn't played to the Evoque's strengths. In particular, I don't enjoy its gearbox, which doesn't respond in the kind of relaxing way I'd like.

It's frustratingly and sometimes worryingly slow to respond when pulling out of junctions, as well as all too keen to shift up a gear when you lift off the accelerator. What that means is that, as you slow down to approach, say, a junction or a roundabout, the gearbox shifts up; then, when you put your foot down again to pick up speed, it takes a while to figure out what you want before the gearbox kicks down and the power kicks in all too abruptly.

To make matters worse, I really don't get on with the steering. You may think it's odd to moan about a lack of feel when all you're doing is pootling around town, but that lack of feel, combined with a lot of play around the straight-ahead position, makes it very difficult to place the car accurately which is vital when you're in the middle one of three very congested lanes heading up the A4 into central London.

Mind you, it's not all bad news with the Evoque. Once I'd finished my final pre-Championships training session at the Westway Sports Centre, the Evoque's gleaming white paintwork meant I had no problem finding it in the dimly lit underground car park.

It had to happen: a few weeks after my recalcitrant Talbot Sunbeam Lotus was recommissioned to the point where I could actually drive it, it conked out. Or rather, I left it for a week and the battery went flat.

Enter the Evoque, which I parked nearby in preparation for a badly needed jump start (the old Lotus twin cam engine seems pretty hard for a modest battery to turn over).

I'm used to pretty complex underbonnet views in many modern cars, but Land Rover's engineers have done their best to tidy up the Evoque's layout by covering everything in plastic sheets.

This sizeable item hides not only the battery but a net of thick cables surrounding it. Luckily it was easy to remove - just four plastic screws - and the Evoque's battery got the old Talbot running in a jiffy.

I loaned the Evoque to fellow Haymarket staffer Jim James last weekend, allowing him to sample the baby Rangie before his own version a two-wheel-drive diesel arrives in a couple of months.

Typically, Jim admired the white paintwork, gave a nod of approval to the tan leather seats, and then turned the car into a small van to take what appeared to be half a garden to the recycling centre. 'Not as much boot space as in the old Mondeo,' he said, 'but itll do for me.'

Far more satisfying to Jim, was the fact that he couldnt get on with the automatic transmission around town. His car will have a six-speed manual, and if he learned anything from the weekend in our car, its that hes made the right choice on the transmission front.

Im inclined to agree. As we approach the 10,000-mile mark, the six-speed automatic gearbox has proved to be the Evoque's weakest point for me, too. The sooner Land Rover gets round to sticking its eight-speed unit in there the better.