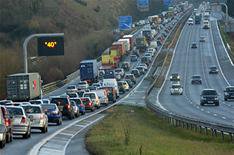 A new law to keep disqualified drivers off UK and Irish roads comes into effect today.

Drivers from the UK who are disqualified while driving in Ireland, and vice-versa, will now also be banned when they return home.

It's the first step in a Europe-wide recognition of driving disqualifications, first proposed in a European Convention in 1998.

Legal loophole
Although recognition of driving bans between Great Britain and Northern Ireland came into effect in 2004, currently drivers banned elsewhere can continue to drive once back in the UK.

Road Safety Minister Paul Clark said: 'We need to continue to work to make our roads even safer and if a UK driver commits a serious offence while in Ireland it is right that their ban should still apply when they return home.

'From today, this new law will ensure that disqualified drivers are not able to escape their punishment, which will keep dangerous drivers off the roads.'