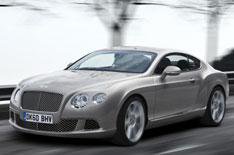 He revealed that a planned SUV could use V8 power, but reiterated his belief that Bentley should become the VW Group's centre for the future development of 12-cylinder engines. Durheimer also said that future Bentleys will use hybrid technology, and suggested that even diesel power is now on the agenda.

'The next generation of diesels will be hard to distinguish from petrol engines,' he told What Car?.

'I think that will be good enough for Bentley, so this type of engine is getting interesting for us. I do have resistance to this from inside the company, but I will overcome it.'