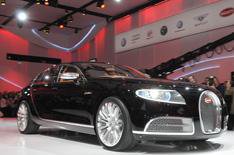 Like the look of this, the Bugatti 16 C Galibier?

Officially, the 16 C Galibier is a concept car, but the company has been gauging customer reaction to the four-seater recently, so don't be too surprised to see this in production within the next three years or so.

Power comes from a modified version of the W16 engine in the Bugatti Veyron, which stops being made in 2012, so unsurprisingly the Bugatti 16 C Galibier will be very, very powerful.

The light-up alloy wheels caught our attention at a preview on the eve of the Geneva motor show, but the clock in the dash is something special, too. When it's time to get out of your Bugatti, simply pop it out of the dash and place it on your wrist!