* You could be damaging your health * Set up the perfect position for you * Try our two-minute tension buster... 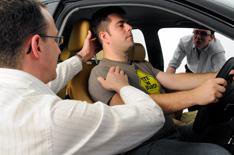 Three drivers have their driving position and problems analysed by our experts Richard Budd and David Knight from re-thinkbodyco.com.

Read through the case studies and see if any of the complaints could apply to you and your driving position.

Peter Brown
Issues: Aching back and shoulders on long trips
Old driving position
The only real support provided by the seat is directly under the buttocks. This means the rest of the body has to strain to maintain position, which causes fatigue and discomfort possibly injury in the long term. The head restraint may not be effective in an accident because of its angle.

Before: Peter's body struggled to keep the same position on long trips, so became uncomfortable.
After: The new seat back position means there's more support for Peter's back and shoulders.The new position...
The new position means Peter can reach the pedals without stretching, which puts less strain on his hips.
The raised seatback makes it easier for him to reach the wheel, and stops his head projecting so far forward. This relaxes the head, neck and shoulder muscles. The new head restraint position reduces the risk of injury.
One month later...
'I have to admit the new position felt odd to begin with I wasn't used to having support around my shoulders. I stuck with it - and didnt even think about it on a long journey I made recently, so I must have adjusted to it already. Since this new position is obviously better for my body, and safer if I have an accident, I'll keep it.'

Pippa Lodge
Issues: My husband always nags me about my driving position
Old driving position
Pippa is reaching for the pedals, which shortens her calf muscles and puts strain on her ankles. Her hips and back are doing most of the work when pressing the pedals and her head is poking forward, putting strain on the neck and shoulder muscles. A poorly positioned head restraint increases Pippa's risk of injury in an accident.

Before: Pippa's back and hips were under strain because the seat was too far back for her.
After: An improved seat posture means better support for Pippa's neck, shoulders and hips.The new position...
Theres now less stress on Pippa's ankles and they are free to do the work when using the pedals this should improve circulation. Her seat now provides a more relaxed position for her hips and lets the neck and shoulder muscles relax. The head restraint will now provide better protection if she has an accident.
One month later...
'It took a lot of getting used to, but my new driving position feels comfortable and much more supportive. My posture definitely feels better and my husband doesn't nag me about sitting up straight any more! Hopefully I won't suffer long-term back issues in years to come, and be safer if I'm involved in a crash.'

Nick Fox
Issues: Bad back and numb legs on long trips.
Old driving position
The slightly slumped position puts a lot of pressureon spinal discs, and back ligaments have become chronically traumatised and unable to provide support. The position also promotes forward head projection and rounding of the shoulders, which puts strain on the neck and shoulder muscles.

Before: Rounded shoulders at the wheel meant Nick's spine was put under a lot of extra pressure.
After: More lumbar support and a towel under his thighs has made driving more bearable for NickNew driving position:
Extra lumbar support has put Nicks lower back into increased extension, cutting pressure on his discs - balancing muscles and ligaments. The head retracts for better head, neck and ribcage balance with improved blood flow. There's less chance of injury in a crash, too. A towel under the front of his thighs allows the hips to relax.One month later...
'It took a lot of getting used to, but I have to admit my new driving position feels extremely comfortable and much more supportive. My posture definitely feels better and my husband doesn't nag me about sitting up straight any more! Hopefully I won't suffer long-term back issues in years to come, and be safer if I'm involved in a crash.'