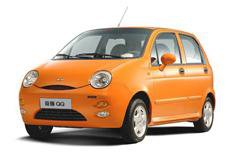 China has confirmed its status as the world's biggest car market with news that both sales and production of new cars has already exceeded 12 million this year.

China's car manufacturing trade body, the China Association of Automobile Manufacturers, estimates that more than 13 million cars will be produced and sold in China over the course of 2009.

MG's owner sells most cars
SAIC, owner of the MG brand, is the country's most successful manufacturer, having already sold around 2.4 million cars in 2009.

The global economic slump has hit car sales in Europe and America, but in China the market is booming. The Chinese Government has encouraged sales with tax cuts on cars with engines smaller than 1.6 litres and also through the use of 'scrappage' incentives similar to those in Europe and America.

Little headway in Europe
Despite strong sales at home, Chinese car makers are still struggling to sell cars overseas. Just 745 cars have been officially exported from China into the EU this year, with few of the country's cars currently meeting European standards for safety on environmental performance.

That is set to change with several Chinese manufacturers planning to build factories in Turkey to supply more modern cars to the European market.