More for you |
DVLA warns of 20% increase in car scamsWhat Car?'s top 10 used electric cars (and the one to avoid)10 most unreliable SUVsWhat Car?'s best cars for less than £250 per monthGuaranteed discounts on our 2020 Award winners - save up to £19,366
Home
News
Citroen to use BMW engines
news

Citroen to use BMW engines 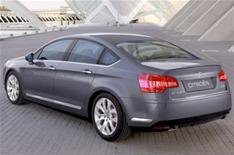 Citroen will follow parent company Peugeot in slotting turbocharged BMW engines into its petrol-powered models over the next few years.

Peugeot uses it in the 207 and 308 ranges and will almost certainly include it in future models alongside its own diesel engines.

Now Citroen has said that it plans to use the highly praised BMW power units, too. It hasn't said which model will get BMW power first, or when, but it is believed the new C5 could be among the pioneers.

Fitting the BMW engine will allow Citroen to achieve its goal of having fuel-saving stop-start systems on every model in its line-up by 2010.

Stop-start - which cuts the engine when stationary in traffic and restarts it when the driver selects first gear - is fitted to every Mini. There is also a gearshift indicator that tells drivers the most economical way to drive and a system that channels normally wasted braking energy into the car's electrics.