More for you |
Most and least reliable family carsWhat to do if you put the wrong fuel in your carVolkswagen Passat GTE long-term test reviewNew issue of What Car? magazine on sale nowTrue MPG: most efficient SUVs
Home
News
Citroen's eco plans
news

* Stop-start to roll out across range * Larger engines get six-speed manual 'boxes * EGS semi-auto shift for C3 Picasso in 2011... 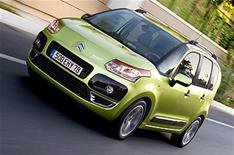 Citroen has revealed plans to introduce stop-start technology and more fuel-efficient gearboxes across its range, as it prepares to launch an environmentally friendly eco-brand.

Stop-start is expected to be rolled out over the next couple of years, and will be fitted to larger cars, such as the C5 and C6, as well as smaller models.

Citroen has also confirmed plans to fit its EGS semi-automatic gearshift to the C3 Picasso from 2011. The system features a paddle gearshift, but works like a manual. It is already available in Citroens, including the Grand C4 Picasso.

C3 Picassos powered by larger engines will also be sold with six-speed manual gearboxes to improve efficiency, again from 2011.