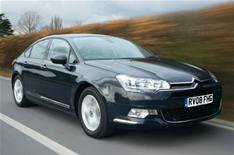 Citroen has announced its most powerful production engine, due out later this summer.

Tweaks to improve fuel economy include a system that recovers energy during deceleration or braking.

Coupled with a six-speed automatic gearbox, the engine promises an average of 38mpg, an improvement on the 2.7-litre engine of 13% in the C5 and 17% in the C6.

The engine will be compliant with Euro V standards, which will become compulsory for vehicles from January 2011. It will be introduced to the C5 and C6 ranges later this summer.