More for you |
Electric car waiting times revealedCoronavirus advice: How do I renew my car's tax if its MOT has expired? Best small cars 2020Past Master: Audi TT Mk1Coronavirus advice: how to contact What Car?
Home
News
City cars and superminis - part 3
news 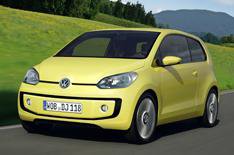 Volkswagen Up!
What is it? Fox replacement will be more compact and more efficient
Estimated price from 8800
On sale Spring 2012

VW had planned to revive the Lupo name for its ultra-efficient new city car, but that idea has been scrapped. The Fox replacement will now definitely be called the Up! (and yes, the exclamation mark is part of the cars name). The styling hasnt changed much since the Up! concept from 2007 (above), but there have been some major changes underneath.

The car was originally designed with a rear-engine, rear-wheel-drive layout to maximise cabin space, but the production model will be front-wheel drive to reduce costs. At 3.4 metres long (the same size as a Toyota Aygo) itll also be shorter than initially planned, but VW says the Up! will still seat four adults.

The Up! will be more expensive than the Fox it replaces, but it will be better equipped and a good deal cheaper to run. We reckon it will be priced just above the Toyota Aygo, which means the entry-level model should cost under 9000. A five-door will follow in late 2012, and Audi, Seat and Skoda will all launch versions of the Up! before 2015. An electric version codenamed E-Up! is expected to arrive in 2013.
Nissan Micra 1.2 supercharged
What is it? New supercharged Micra is the cleanest petrol ever
Estimated price 11,000
On sale Spring 2011

Nissans new supercharged Micra makes diesels look a bit redundant. Its 1.2-litre direct-injection engine pumps out just 95g/km of CO2 less than any other petrol car which means every gallon should last more than 70 miles. Its all down to a clever variable valve timing system, which wastes less fuel than conventional engines and converts more of it into energy.

Despite its incredible efficiency, the supercharged Micra is no slouch. With 98bhp and 105lb ft of torque, its much pokier than the only other engine offered in the Micra, a 79bhp 1.2 petrol. It doesnt turn the Micra into a hot hatch, but you dont have to thrash the engine to keep decent pace on the motorway, and it pulls strongly when you need to pick up speed. Its also pretty quiet.

The supercharged Micra will be available from next April and will be priced around 11,000.
Toyota Verso S
What is it? Toyotas new Honda Jazz rival
Estimated price from 12,000
On sale March 2011

Toyotas new mini-MPV will lock horns with the Honda Jazz and Kia Venga early next year. Based on the Yaris supermini, the Verso S is less than four metres long, but clever use of space means it feels bigger inside than youd imagine.

Four adults fit without much of a squeeze, but the interior layout does compromise boot space. To solve that problem the rear seats fold flat, more than trebling the load bay from 430 litres to 1388 litres.

Toyota says the Verso S has been designed to appeal to people downsizing from larger cars such as Ford Mondeos and BMW 3 Series, as well as to compete directly against other mini-MPVs. Theres a new touch-screen multimedia interface to boost appeal with buyers used to more expensive cars.

There will be three generously equipped trims to choose from, and we expect petrol models to start at around 12,000.
Renault Clio/Zoe
What is it? New Clio and electric supermini
Estimated price from 14,000
On sale Summer 2012

The Renault Zoe (right) was unveiled at the 2010 Paris motor show and, while it is a credible electric car in its own right, it is also significant for showing how the front end of the new Clio supermini will look when its launched, some time around the middle of 2012.

Meanwhile, the Zoe concept cars styling shows 90% of how the real thing will look. It is powered by a 60kW electric motor and a full battery charge takes between 3.5 and eight hours. It can achieve an 80% charge, however, in 37 minutes.
Toyota Yaris Hybrid
What is it? Toyotas tiniest hybrid yet
Estimated price from 16,000
On sale 2012

Toyota plans to offer a hybrid version of every car in its range by 2020, and the Yaris will be its smallest so far when it arrives in 2012. The hybrid will be built alongside other Yaris models at Toyotas Valenciennes factory in France, and will compete for sales with the Honda Jazz Hybrid, as well as the VW Polo Bluemotion.

Wed be surprised if Toyota manages to squeeze in the 1.8-litre petrol engine used by the Auris Hybrid and Prius alongside an electric motor. The 1.33-litre petrol looks a more likely bet, which would pave the way for a CO2 output of under 80g/km.
In brief...
Fiat Panda
What is it? Third generation of Fiats city car
Estimated price from 7500
On sale Spring 2012
The replacement for the current Panda will almost certainly get the
new two-cylinder Twinair petrol engines.
Renault Twizy
What is it? Renaults first electric car
Estimated price from 7000
On sale Summer 2012
This wacky two-seater is powered by a 20bhp motor. The Twizy can hit 47mph and do 60 miles before it runs out of juice.
Nissan Twizy
What is it? Nissans take on the Renault Twizy
Estimated price from 7000
On sale Late 2012
Officially called the New Mobility Concept, Nissan is expected put a version of partner Renaults Twizy on sale a few months later.
Toyota Yaris
What is it? Face-lift for Toyotas mini
Estimated price from 10,500
On sale Summer 2011
The Yaris will have a refresh before the Hybrid (right) appears. Japan will get its own version (the Vitz) in spring. We get it by summer.