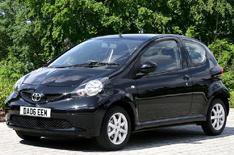 Toyota's the big winner in the class for the smallest cars of all, but Fiat and Peugeot have plenty of reason to feel encouraged by the results of the Panda and 107.

Looking for a small car that's big on satisfaction? Look no further.

Toyota Aygo owners reported that the pint-sized Toyota's biggest strengths were its pint-sized bills. The Aygo sipped fuel like grandma nursing a G&T.

Insurance bills were low and the cost of servicing and repair was keener than any other city car.

When an Aygo did need to visit a dealer, it was easy to book the car in promptly and the quality of dealer facilities was impressive.

Perhaps surprisingly, owners rated reliability as average. If trouble did strike, the heating and ventilation system or the exterior were the most likely culprits. There were few engine problems and the transmission proved sound.

Ride and handling, and engine performance got average scores, but owners loved the styling.

Fiat's poor result overall certainly isn't the Panda's fault. It's the best-performing Fiat in this year's survey and is second in class.

The bedrock of the Panda's strong showing is good reliability - the best of any city car. The transmission and engines proved particularly robust. Faults with the stereo occurred more frequently than average, though.

If only the service from dealers had been better, the Panda might have given the Aygo a pair of black eyes.

Owners loved the 107's cute styling and were pleased by the rock-bottom running costs. Fuel consumption was good and insurance costs didn't break the bank, either.

If it weren't for some reliability issues, the Peugeot might have done better still. Annoying faults with the seats and bodywork left room for improvement.

When the 107 needed professional attention, dealers did a decent job.

The Alto was certainly kind to owners' wallets - fuel bills in particular were pleasingly low. However, although it was cheap to run, the Suzuki didn't really shine in any other area.

Owners were happy with the driving experience, but the cabin and exterior styling weren't regarded as especially appealing.

Mechanical parts wore the miles well, but there were too many reports of malfunctioning controls.

Kia dealers shouldn't expect a card from any Picanto owners next Christmas.

The little Kia's score for dealer service was worse than any other city car's, with the standard of dealer facilities being the biggest beef.

Owners didn't think it was especially cheap to run, either. Average scores for reliability and driver appeal complete a rather mediocre picture for the Picanto.

Owners reported fewer transmission problems with the Ka than any other city car, although the engines did occasionally need some attention.

The bodywork, seats and stereo also lasted well, and dealers can take pride in the standard of service.

More than anything else, running costs let the Ka down. Servicing bills were too high and owners complained that the Ka drank unleaded too quickly.

The good news first - the Ignis hardly ever left owners stranded at the roadside, since the mechanical parts are reasonably tough.

The bodywork also lasted well, and owners were happy enough with the way the car drove and liked the looks.

On the other hand, there were too many problems with the interior, particularly the heating and ventilation system.

Dealer service also picked up a below-average score, and running costs were too high.

Why buy a Matiz when it finishes 88th out of 100 cars? Well, for one thing, owners reported reasonable running costs.

They found few problems with the exterior, rated the cabin as quite appealing and were happy with the looks.

Otherwise it's a disappointing picture. Reliability was below average, and there were too many niggling problems inside the car, especially with the heating and ventilation.

Engine performance and ride and handling were also below par.

What went wrong, Vauxhall? Last year the Agila was 51st. This year it has plummeted into the bottom 10.

Running costs were unacceptable for a city car. Insurance bills and fuel consumption were worse than average, but it was the price of servicing and repairs which really angered owners.

Reliability also needs to improve. Too many people reported problems with the braking system, while ventilation issues cropped up far too often.