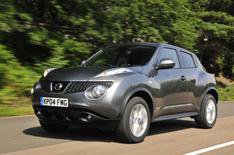 It was always going to take a special car to beat last years price point winner, the Skoda Yeti 1.2 TSI S. The Nissan Juke is that car.

From its attention-grabbing exterior to the motorbike-inspired interior, theres nothing else like it on the road. The petrol engine is surprisingly punchy for a 1.6, while the taut handling and communicative steering make the Juke fun when the road turns interesting.

Its not the most practical car by any means, but its big enough for light family duties and besides, your children will quickly forget any space issues when you drop them off at the school gates in the coolest car going. A bargain price, low running costs and loads of standard kit round off the Jukes repertoire.

If you need more space, the Yeti is still a cracking car. Its as practical as crossovers get for the money and its good to drive.

The cut-price Suzuki SX4, now with a more powerful petrol engine, is also worth a look.

Neither can beat the Juke for all-round appeal, though. Fresh, fun and funky, the Juke is a worthy winner.

Competition has been red hot in this price point over the past year. First there was the restyled Nissan Qashqai, which added better refinement and more cabin storage to its existing talents of a silky ride, low price and generous kit list.

The Mitsubishi ASX also waded in with its punchy, economical diesel engine and roomy cabin. Then there were the Hyundai ix35 and Kia Sportage twins, mixing striking looks with family-friendly cabins and masses of equipment for the money.

Despite all the new rivals, the Peugeot 3008 takes the plaudits for a second year running. Thats not to say that Peugeot has rested on its laurels, though. A new petrol engine offers more power and better economy than the one in last years winner, while the classy cabin and smooth ride remain as impressive as ever.

Its the Peugeot 3008's versatility that seals the deal, however. It has a spacious cabin and a large, well-shaped boot, and its quick and easy to convert from five-seat family car to two-seat removal van.

To be honest, nothing got close to defeating the Volvo XC60. In the past year, the Toyota RAV4 gained a new, efficient front-wheel-drive powertrain and more equipment, while the sharp-handling Ford Kuga got uprated diesel engines.

Neither is a patch on the Volvo, though. Not even the classy and practical Volkswagen Tiguan got a look in.

The XC60 effortlessly combines the best bits of 4x4, MPV and family car in one package, mixing rugged looks and a high-up driving position with reasonable running costs.

Many MPVs could learn a lesson in versatility from the XC60, too. Theres masses of space front and rear, a big boot and plenty of thoughtful touches such as optional integrated child booster seats.

This front-wheel-drive DRIVe model will be a rare sight at fuel stations, thanks to a new 2.0-litre engine that uses even less fuel than the 2.4 in last years version. Its CO2 emissions are also impressively low.

The XC60 is a deserving winner at this price point for the second year running.

Performance
0-62mph 10.3sec Top speed 124mph
Running costs
Economy 47.9mpg CO2 154g/km
Insurance group 28
Tester's view
I love the fact that crossovers have the cool, chunky looks of a 4x4, while mixing the practicality of an MPV with the dynamics of a saloon car.

The showstopper for me this year has been the Nissan Juke. It looks like nothing else on sale at the moment, which is great. I also like the way it fits with my lifestyle: it easily copes with my daily motorway commute without costing too much in fuel or road tax, yet its large enough for taxi duties with friends and family at the weekend. Its also fun to drive.

Id quite happily take home either of the Jukes two rivals here, too. The Volvo XC60 has acres of space in its posh, plush cabin, while our 2010 Car of the Year the Peugeot 3008 does everything you could possibly want a car to do, and does it perfectly.
Rosie McMahon Assistant database editor
Rosie.McMahon@whatcar.com