* News from the Detroit motor show * GLK to UK after all? * Car workers stage protest... 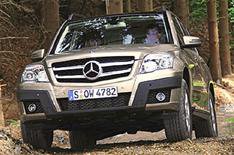 GLK to UK?
Mercedes' compact 4x4, the GLK, could be coming to the UK after all.

It was originally thought to be too expensive to engineer it for right-hand drive, but the company has made a 'big commitment' to do the work, says Wilfried Steffen, managing director of Mercedes in the UK.

Because the GLK shares its underpinnings with the C-Class, the work now being undertaken would make it easier for Mercedes to give its small saloon four-wheel-drive over here to rival to Audi's A4 quattro range should it think there is a big enough market.

Go electric
Electricity is 'the most viable way to get away from our dependence on petroleum', Bob Lutz, General Motors' vice-president in charge of product development, said at the Detroit show.

The distributive infrastructure is already in place, which is not the case with hydrogen for fuel-cell vehicles, he added.

Car workers' protest
United Auto Union workers staged a peaceful demonstration in support of their jobs and healthcare provisions and against 'foreign' car factories in the southern states of Amerfica outside the Cobo Arena where the Detroit show is held.

Banners carried slogans such as 'UAW supports southern workers by default', 'Kill the car kill the country' and 'Make the bankers and bosses pay'.

European CO2 approach flawed
The European Union's focus on tailpipe emissions rather than on lifecycle CO2 output is a 'flawed approach', Bentley sales and marketing chief Stuart McCullough said at the Detroit show.

'The only way we can truly evaluyate the relative merits of different technologies and fuelsis to look at the "wheel-to-wheel" emissions, taking in the emissions of both the vehicle and the energy source,' he added.

Bentley is accelerating the use of second- and third-generation biofuels as a way of reducing the CO2 output of its range.

What Car?'s star turn
What Car? got a mention at the start of the Ford presentation at Detroit.

The nomination of the Focus 1.6 Econetic diesel as our Green Car of the Year was one of the awards Ford won in 2008 that was highlighted at the start of its press briefing.