More for you |
What Car?'s top 10 used electric cars (and the one to avoid)10 most unreliable SUVsWhat Car?'s best cars for less than £250 per monthGuaranteed discounts on our 2020 Award winners - save up to £19,366Skoda Kamiq long-term test review
Home
News
Doh! The Simpsons and Renault team up
news

Doh! The Simpsons and Renault team up

* Cartoon characters promote Kangoo * Simpsons family put MPV to the test * Is it better than Duff beer? No, probably not... 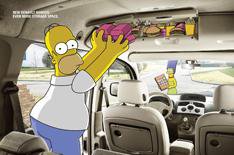 This is just one of the many pearls of wisdom uttered by Homer Simpson, the yellow-skinned star of The Simpsons cartoon show.

It's an unlikely alliance, then, that sees Homer spearheading an advertising campaign for the New Renault Kangoo

Still, clearly the Renault marketing men have ignored another of Homer's catchphrases 'Trying is the first step toward failure' and decided to do something different in their latest campaign.

In a series of television adverts, the Simpson family, made up of Homer, his wife Marge, children Bart, Lisa and Maggie and grandfather Abraham, leave their hometown of Springfield and enter the real world.

Inevitably, this throws up a series of tricky situations, and the Kangoo's folding rear seats and storage space are put to the test as the kids squabble and Homer tries to hide some food after Marge threatens to put him on a diet.

By the time their stint in the Kangoo is up, however, the fractious family give the MPV their seal of approval.

Good, though it is, though, we doubt the Kangoo will surpass Duff beer in Homer's affections.

'Ah, beer,' he once philosophised. 'The cause of and the solution to all of life's problems.'