* All leading models driven * Read our verdicts * Are they viable?... 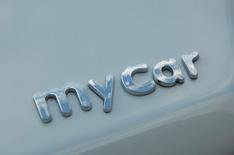 There's lots to like about the MyCar. For a start, it was designed by Italian legend Giorgetto Giugiaro the fellow who penned the original Lotus Esprit and the more recent Alfa Romeo Brera.

It's the smallest car here, but that can be useful when you're trying to park. As electric cars go, it's also pretty cheap, and its eight-hour charge time isn't bad, either.

Unfortunately, it's too sluggish even for the city centre. It will hit 30mph, but was the only car here that failed to do so on the 250m stretch of test track we used. The 40-mile range, too, is the second worst of all the cars on test.

A model powered by superior lithium-ion batteries will arrive later this year, which should increase its range.

The build quality on the pre-production car we tested was, frankly, awful. However, evstores (the company which sells the car in the UK) says production cars will be far better.