More for you |
Used Ford Fiesta long-term test reviewWhat can I do about a security issue on my car? Best cars for less than £250 per monthWhy is my new car’s fuel economy so poor?Top 10 used electric cars
Home
News
Euro NCAP seat test results
news

* Manufacturers should do more * Small cars particularly poor * Price or complexity not the issue... 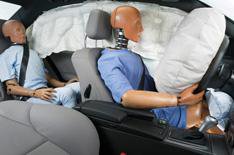 Only five of 25 seats tested for their ability to minimise whiplash injuries were rated as good, after new trials by Euro NCAP. Twelve were given a marginal rating and eight were scored as poor.

The Daihatsu Terios, Peugeot 308 CC and Suzuki Splash did worst of all with zero marks in the assessment, which will be included in every Euro NCAP crash test from early next year.

Disappointed with small cars
Euro NCAP said it was disappointing to see so few seats do well, and it was particularly concerned that small cars such as the Terios and Splash performed as poorly as they did.

As small, light city cars, theyre more reliant on good seat design, and more likely to be involved in the kind of rear-end impacts that result in whiplash injuries. They are also more likely to be driven by women, who, research shows, are 2.5 times as likely as men to suffer injuries.

Cost or complexity not the issue
The efforts made by manufacturers with five-star seats show that it isnt necessarily difficult, or expensive, to provide motorists with safer designs. In fact, Volkswagen says the seat in its Mk VI Golf, which scored highly at 3.31 out of a possible 4, costs no more to produce than the seat in the Mk V.

The Golf's seat is a simple passive design that doesnt automatically move forward in a collision, unlike the re-active headrests in the Alfa Romeo MiTo and Vauxhall Insignia, which also won good ratings.

The Audi A4 won a five-star rating with a passive design, while Volvos XC60 was awarded 3.54, the highest score of all.

The Mercedes-Benz M-Class gained only a marginal result, despite the fact that it has pro-active head restraints that move up and forward in anticipation of a collision. Testers found the rest of the seat structure wasnt good enough to justify a better score.

Front seats tested
Only front-seat design has been assessed at this stage because 91% of injuries are suffered by front-seat passengers.