Fisker Karma on sale next year

* Fisker Karma to cost around 80,000 * Available in left-hand drive only * On sale through one London dealership... 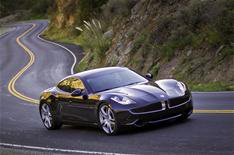 The Fisker Karma electric range-extender luxury saloon will go on sale in the UK by the spring.

It will cost around 80,000 and initially it will be sold through one London dealer.

However company boss Henrik Fisker admitted that the Karma will only be left-hand drive and there are no plans for a right-hand-drive version at least in this generation.

'The first right-hand-drive Fisker will be the new Atlantic,' Fisker admitted to What Car?

The all-new Atlantic will be smaller and cheaper than the Karma - similar in size to a BMW 3 Series - and is expected to go on sale in 2014.

Unlike the Karma, which uses a GM-sourced engine, the Fisker Atlantic will be powered by a BMW four-cylinder petrol engine, allied to a new generation of Vauxhall Ampera-style electric range-extender technology.

The new Atlantic saloon is also expected to spawn a family of Fiskers, which may include an SUV and an estate version, according to insiders.

Fisker revealed that he is unlikely to produce a 1 Series or Audi A3 rival in the near future, though.

'If we make a car smaller than the Atlantic we would need a strategic partner to share a platform with and that is unlikely for at least the next five or six years,' he said.