* Fiesta-based SUV to be launched at Indian show * Latest from Ford's 'One Ford' global strategy * Rival to Nissan Juke... 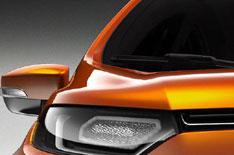 A Ford Fiesta-based SUV will be launched at the Delhi Auto Expo next month.

A teaser image has been published on Ford India's website, which shows the front end of the SUV. The styling is reminiscent of the new Ford Kuga revealed at the Los Angeles motor show last month and looks more rugged than the Fiesta hatchback on which it's based.

Choosing Delhi to launch the new product is noteworthy, too. The Delhi motor show takes place on January 6 a few days before the Detroit motor show in Ford's hometown. The new vehicle will be the latest in the company's 'One Ford' strategy where it produces cars for global markets rather than local ones. The latest Ford Focus is the first example of this strategy.

It's likely that the Fiesta-based SUV will go on sale in the UK, providing Ford with a rival for the Nissan Juke and the forthcoming Corsa-based SUV from Vauxhall.