More for you |
The most - and least - reliable large SUVsMost (and least) reliable large SUVsCar of the Year Awards 2021: Best plug-in hybrid for long distancesWhat should I do about long wait for new Ford Kuga PHEV? 2020 What Car? Reliability Survey: large SUVs
Home
News
Ford Kuga
news 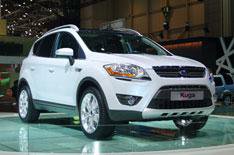 When the first pictures of the Ford Kuga were released last month, many were prompted to ask if the 20,495 starting price was simply too much.

Those concerns remain, but seeing the distinctive 4x4 in the metal at the Geneva motor show has gone some way to convincing doubters that the Kuga really can tackle rivals that include the Honda CR-V, Toyota RAV4 and Land Rover Freelander.

The real test, however, may well be how the Kuga copes off road. Ford claims it has genuine ability and it will need to have if it is to justify the pricing.

When the car is launched in June, it will have just one engine in the line-up: a 134bhp 2.0-litre diesel. It will be coupled to a six-speed manual gearbox and a permanent four-wheel drive system.

The Kuga emits 169g/km of carbon dioxide and does 44.1mpg on average.

As with the engine line-up, Ford has kept the choice of trims simple. There are only two: Zetec and range-topping Titanium.

Inside, the Kuga has fold-flat rear seats, as well as storage areas under those seats and beneath the boot floor. Theres 1355 litres of luggage capacity with the rear seats down and 410 litres with the seats up.