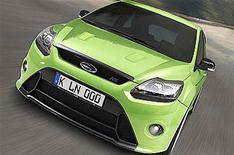 Ford is anticipating a long waiting list for its new Focus RS, even though the car will only be launched at the British Motor Show this morning.

Dealers are reporting that they have already started receiving deposits for the car, even though buyers haven't had a chance to see it, they won't be able to drive it until next spring and they don't know what the final price will be.

A company insider revealed that Ford's flagship Dagenham dealership had already received 11 1000 deposits for the car ahead of its unveiling at today's British Motor Show, and a further rush is anticipated after the show.

'The interest in the car is phenomenal, and Ford will be trying to maintain that level of interest by ensuring the car is always desirable we'll be building less than we can sell,' he said.

Meanwhile, Jost Capito, who has headed development of the Focus RS, has insisted that the car will be driveable, despite being front-wheel drive.

The car is powered by a turbocharged 296bhp 2.5-litre engine with 302lb ft of pulling power, and is expected to travel from 0-62mph in less than six seconds.

'We considered four-wheel drive very carefully, but our development centre came up with a new front suspension system, linked it to a limited-slip differential and the results are unbelievable,' said Capito.

'There is no fighting for grip between the front wheels. Already the car is quicker than its four-wheel drive rivals on road and track.'