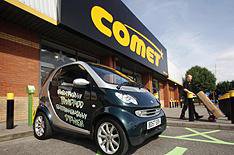 Electrical retailer Comet is offering its customers free charging for their electric vehicles.

It has started the pilot scheme in its store car park in Purley Way, Croydon, and hopes to roll-out free charging at its 'Plug & Go' points across its stores nationwide.

The company also revealed it's in talks to sell electric cars at its stores.

Comet's managing director, Hugh Harvey, said: 'As an electrical specialist we need to respond to customer demand and with electric vehicles set to revolutionise city living over the next few years, it is only right that we look to sell them as part of our offer.'