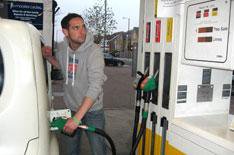 UK fuel retailers have not kept prices artificially high, according to the Office of Fair Trading (OFT).

The OFT investigation was launched last September to examine whether petrol and diesel prices fell when the price of crude oil dropped, and if anti-competitive behaviour by supermarket chains and oil companies was making it impossible for independent fuel retailers to compete.

It also investigated whether a shortage of competition in remote areas had resulted in higher prices for rural communities.

However, the OFT investigation has rejected these claims, and instead blamed higher crude prices and increases in tax and duty for increased prices at the pump.

'Cheapest fuel in Europe'
The OFT claims that British drivers actually have some of the cheapest fuel prices in Europe before tax and duty is added.

Supermarkets have played an increasingly positive role in petrol pricing, according to the OFT's report, with the 'big four' chains' buying power allowing them to sell petrol at lower prices than many competitors.

The OFT report also revealed that petrol and diesel tends to be cheaper in towns with a greater number of fuel retailers particularly where a supermarket forecourt is present.

OFT chief executive Clive Maxwell said: 'We recognise that there has been widespread mistrust in how this market is operating. However, our analysis suggests that competition is working well, and rises in pump prices over the past decade or so have largely been down to increases in tax and the cost of crude oil.

OFT decision condemned
However, the RMI Petrol Retailers Association (PRA), the trade association representing independent forecourt retailers in the UK and The AA disagreed with the findings.

Brian Madderson, PRA chairman, said: 'How can the OFT, supported by Government, try and tell motorists and businesses that the market is working in the consumers interests? As independent retailers, we are left trying to explain the unexplainable to our forecourt customers who will rightly be angry at another unwarranted price hike.'

AA president Edmund King said: 'The OFT sees the fuel pricing market as competitive but this clashes with drivers frustration on the forecourts. If fuel pricing is fair and competitive, there is no reason not to publish petrol and diesel wholesale prices to prove the point and reassure motorists.