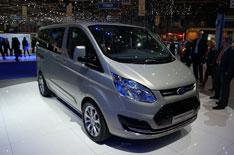 The Ford Tourneo custom concept has been revealed at the 2012 Geneva motor show.

It will be the basis for an all-new family of Ford Transit people movers and commercial vehicles.

The Tourneo features an all-new interior design with driver-focused cockpit, and a luxurious new cabin with high-quality materials.

The concept is powered by an improved 153bhp version of Fords 2.2-litre Duratorq TDCi diesel engine.

The range will eventually include 98bhp and 123bhp variants of the same engine. All versions will be paired with a six-speed manual transmission and feature front-wheel drive.