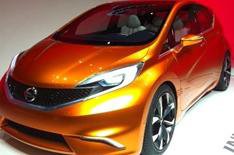 The Nissan Invitation has been revealed at the Geneva motor show 2012, and the company has announced the new car will be built in the UK.

The Invitation is a concept car that previews the next Nissan Note and is set to go on sale by the middle of next year.

The car will be made at Nissan's factory in Sunderland, creating 400 jobs at the plant and a further 2000 in the UK supply chain, says Nissan.

Nissan will invest 125 million in the project, with a further 9.3million grant coming from the UK Government's Regional Growth Fund.

Nissan claims the production version of the car will use a lightweight platform, helping to improve its fuel efficiency and lower CO2 emissions. It claims the greenest variant of the Invitation will dip beneath the 100g/km barrier, taking it into the tax-exempt Band A.

Nissan also says the concept features an Around View Monitor, the first time it has been seen on a vehicle of this size. It uses cameras to show the driver the full surroundings and is designed to make reversing and parking easier and safer.

The Invitation's cabin has extensive use of digital displays, including a central infotainment system and a sophisticated-looking ventilation control. These elements are likely to be toned down for the production version, although the concept car's simple, uncluttered dashboard layout looks production-ready.