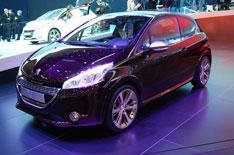 The Peugeot 208 XY concept car has made its public debut at the 2012 Geneva motor show, and the luxury 208 could go on sale later this year.

The 208 XY has a similar makeover to the 208 GTI concept car that also makes its debut at the Geneva show. There are extended wheelarches and sills and a chunky front bumper, but the XYs exhaust is hidden, and the alloy wheels and front grille are more classically styled.

Peugeot says the appearance of the XYs Pulsion paintwork constantly changes, depending on the distance and position from which it is viewed. The effect was achieved by the application of sixteen coats of paint and lacquer.

The name XY is said to have been inspired by X and Y chromosomes and human potential, while the car is aimed at people who want a luxuriously trimmed supermini thats less aggressive and overtly sporty than the GTi.

The 208 XY Concept has a 1.6-litre diesel engine, but a production version is likely to be offered with a range of petrol and diesel engines. Peugeot hasnt confirmed production of the XY, but wed be surprised if it wasnt launched around the same time as the 208 GTI, in late 2012.

PSA and FCA merger - what does it mean for car buyers?