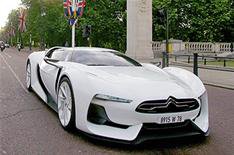 Citroen's concept supercar, the GTbyCITROEN, has hit the streets of London to recreate part of the 'street circuit' featured in Gran Turismo the PLAYSTATION3 driving game which it was designed for.

The concept car is the result of a partnership between Citroen and Polyphony Digital Inc. It's nearly five metres long and just over a metre high, but there are no details on technical spec and it won't be produced for sale.

The GTbyCITROEN will make its UK show debut at the Goodwood Festival of Speed (July 3-5) and will climb Goodwood Hill as part of the Sunday Times Supercar Run.