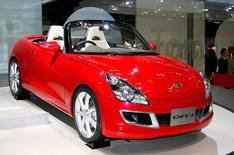 If you're looking for something compact yet quirky, and fun yet frugal, then you might want to consider a Kei convertible.

'Kei' (meaning 'light automobile) is the generic name given to a group of curious little cars from Japan, which even today, long after many have ceased production, have proved to be the inspiration behind a whole new generation of cheeky drop-tops.

Originally designed to exploit Japanese tax and insurance regulations, these pint-sized machines are perfect for urban driving. Their micro dimensions mean you should be able to nip through traffic and squeeze into small parking spaces with ease.

Here's the What Car? guide to the kooky Kei convertibles, and some of the cars they inspired.

Originally styled by famous Italian car designers Pininfarina, the Beat was a true Kei car, with an engine no bigger than 660cc, and no more than 63bhp. It looks a little sportier than some, but don't be fooled into thinking it's a performance car.

Never officially sold in the UK by Honda, all the cars in this country are imported by individuals or specialist dealers. It's hard to lay your hands on a Beat, and even seeing one on the road is an event. Spares and repairs may be a problem as a result.

Just like the Beat, the Cappuccino is a true Kei car, being under 3.3 meters long and narrower than 1.4 meters wide.

The Suzuki was officially available in the UK from 1993, with roughly 1200 sold in either red or silver. In '95, tighter European emissions rules meant that it was no longer viable to import the car in such low numbers.

An improved Cappuccino was produced from '95 onwards and, although not officially available, an unknown number were imported into the UK. It's not as rare as a Honda Beat, but it's far from common. Specialist servicing and repairs are advisable.