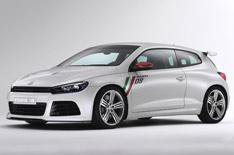 This is the Volkswagen Scirocco Studie R, a hot version of the coupe that could become production reality by early 2010.

Unveiled at the Bologna motor show, it is powered by a 266bhp 2.0-litre petrol engine.

VW says the inspiration for the car's styling comes from the Scirocco GT24 that raced at the Nurburgring 24-hour race in the summer.

As a result it has three large air intakes to aid cooling, and a front splitter to prevent lift. A rear wing and revised, sportier bumper are also fitted.

While many of the sporty details are expected to remain if the car reaches production, its look is still expected to be toned down slightly.