How do they compare? 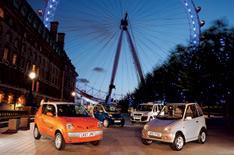 Things dont start well for the G-Wiz. It looks and feels like Third World transport. The doors and boot need a real slam to shut properly and the cabin is spartan. The plastics feel more solid than they look, however.

Jump behind the wheel of the Mega City and the layout feels more like that of a proper car, albeit one made during the 1980s. The plastics are flimsy, though, and the cabin shakes and rattles on the move. The drivers seat on our test car moved back and forth without us touching the adjustment lever, which was more worrying.

Both the G-Wiz and Mega City are classed as quadricycles, which means they dont have to pass the minimum occupant crash protection standards that cars do. In early 2007, the Department for Transport found serious safety concerns when crash testing a G-Wiz at 35mph. However, improvements have since been made.

The Smart and Micro-Vett are proper cars. That means they should be as safe as the standard cars theyre based on both of which scored three out of five in Euro NCAPs programme.

Only the Doblo seats more than two in comfort. The Smart is strictly a two-seater but, if you fork out an extra 500, NICE will fit a couple of seats in the back of the Mega City. Space in the back row is tight, though.

Believe it or not, the dinky G-Wiz comes with four seats as standard, but even small children will need to breathe in to squeeze in the back.