More for you |
How to spec a Peugeot 5008Can I get scrappage and Target Price discounts?Most and least reliable family SUVsThe most reliable family cars on sale - and the least2020 Toyota Hilux revealed: price, specs and release date
Home
News
How electric cars could earn you 8000
news

How electric cars could earn you 8000

* Report says electric cars could earn cash * by managing demand from the electricity grid * and selling power back at peak times... 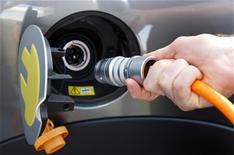 Electric cars could earn owners between 50 and 8000 a year by managing demand from the electricity grid and even selling power back to the network, according to a new report.

That's the verdict from technology company Ricardo, which has used data from the National Grid to model how cars plugged into the electricity network could behave in the future.

If electric cars could manage their recharging so that they would pause during peak periods and resume in off-peak periods Ricardo believes owners could receive around 50 for allowing other users to access power supplies during times of high demand.

This type of power management would require no investment on the part of the owner, but electric cars could earn far more if bi-directional vehicle-to-grid equipment was installed in homes and workplaces.

This technology would allow vehicles to supply the electricity grid with power during peak times and earn owners around 600 a year per car.

If a more-powerful three-phase electrical system were installed, each car could earn up to 8000.

Too good to be true?
The bi-directional vehicle-to-grid equipment wouldn't be cost-effective for domestic users, and would only make financial sense to businesses running fleets of vehicles that were able to connect to the grid at the same time.