More for you |
The best 21-plate large SUV offersCitroën Berlingo long-term test reviewE10 petrol - what is it and how could it affect you? Hello to 21-plate day: The best cars you can buyNew Volkswagen ID.3 and Citroën e-C4 vs Kia e-Niro
Home
News
How much cash might the Government make?
news

* Who sold the most cars? * How much cash did the Government make? * Did scrappage lower CO2 and protect jobs?... 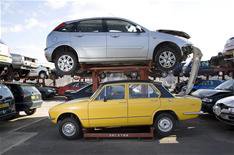 The Department for Business, Innovation and Skills (BIS) and the SMMT say they do not have an average price for cars bought under the scheme, but it's highly likely that the VAT on vehicle sales has returned a profit for the Government.

If the average price of cars sold under the scheme was just 6666.66 the Government would break even.

Assuming an average on the road scrappage price of 10,000, and VAT at the lower rate of 15%, sales under the scheme would net 526 million in tax revenue, leaving the Government with a profit of around 126 million.

Administration costs were included in the 400 million provision, so that won't have cost the Government a penny (it accounted for less than half of one percent of the available funding).