Hyundai i20: pictures and details 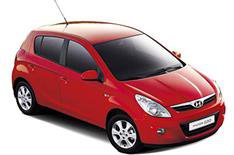 This is the Hyundai i20 supermini, which will go on sale in early 2009.

The five-door i20 will replace the Getz model in Hyundai's line-up, and its dimensions mean it will be one of the larger cars in its class.

Although Hyundai hasn't released any engine or trim details, it has said that the i20 range will follow the company's trend of offering a high level of standard equipment.

Further details are expected when the car is unveiled at the Paris motor show on October 2.

i-blue concept
Hyundai will also show a fuel-efficient i-blue version of the car, although it hasn't been confirmed for production yet.

It will be powered by an 89bhp 1.4-litre diesel engine which is linked to a six-speed manual gearbox instead of the standard car's five-speed unit.

It will emit 99g/km of carbon dioxide and average 68mpg.

Santa Fe Petrol-Electric Hybrid concept
A petrol-engined electric hybrid concept car based around the Santa Fe will also be displayed at the Paris motor show.

The car's 2.4-litre petrol engine is mated to a six-speed gearbox, with a 30Kw electric motor powered by lithium-ion batteries boosting power and lowering emissions.

ix55 sports utility vehicle
The seven-seat iX55 4x4 will also be shown in Paris, although it won't go on sale in Britain.

It is based on a restyled version of the Veracruz model that is on sale in the UK, and will be available in some European markets next year.

Genesis models
The new Genesis saloon and coupe concept car will also be in Paris.

Although the saloon won't be sold in the UK, there coupe might be if it is put into production.