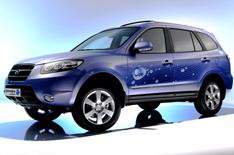 Hyundai will reveal a petrol-electric hybrid version of its seven-seat 4x4, the Santa Fe, at next week's Paris motor show.

Although officially a concept car, we understand it's slated for production towards the end of 2010 or early 2011 as the Santa Fe blue. It has been developed specifically for Europe.

'Customers of SUVs are among the most satisfied of any car users,' said Hans van Gent, Hyundai's European head of product planning.

'They love the high seating position and the view out, so we need to find a way of accommodating them along with increasing concerns about fuel economy and emissions.'

Hyundai quotes a CO2 figure of 148g/km far better than the current diesel Santa Fe with an average fuel economy of more than 45mpg.

A Hyundai Sonata using the same drive system will go on sale in the US in 2009 or 2010, while Korean customers will be able to buy an Elantra a model no longer sold in the UK with the world's first liquefied petrol gas mild-hybrid engine next year.