More for you |
How to spec a Peugeot 5008Can I get scrappage and Target Price discounts?Most and least reliable family SUVsThe most reliable family cars on sale - and the least2020 Toyota Hilux revealed: price, specs and release date
Home
News
Interior
news 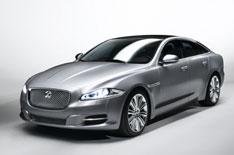 The interior is as radical a departure from the current XJ as the exterior. 'We wanted to make it unforgettable, with seductive design and intuitive controls,' says chief programme engineer Andy Dobson.

There's the wood and leather Jag buyers expect, but it adorns a completely new style of dash. 'Virtual' 3-D instruments deliver essential information; a media hub controls the CD and DVD players, analogue or digital radio, TV and external extras such as a USB stick or iPod; a high-definition TFT touch screen allows the driver and front passenger to watch different things at the same time.

There's a new 'say what you see' voice command system that's said to be more true to life than previous efforts. Bowers & Wilkins provides the top-end hi-fi system, as in the XF, but it's a new 1200-watt, 20-speaker, Dolby 7.1 surround-sound affair.

The car will make its first show appearance at Frankfurt in September and go into production in November, which means the first lucky owners might just get a car in time for the New Year.