More for you |
The best electric cars you can buy today The safest cars on sale todayBest plug-in hybrid cars 2021Budget 2021: What does it mean for motorists?BMW 530e long-term test review
Home
News
July 2012
news 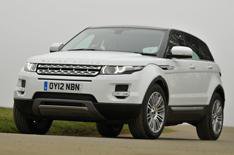 Jaguar Land Rover has been in the news a lot recently, with thousands of jobs being added at its UK factories. There's more to come, too, and meetings on future tech have taken me up to the company's HQ in Gaydon a couple of times in the past two weeks.

This, of course, equates to me taking the Evoque 'home', because we originally picked up the car from the design studio in Gaydon - where we photographed it alongside the original LRX concept model.

It's apt, therefore, that this journey really plays to the car's strengths. With the automatic gearbox nice and content in top gear, the Evoques 2.2-litre diesel engine fades behind the wind noise to become a refined companion. The excellent ride quality (even on 19in wheels) and the slightly elevated driving position do the rest.

Perhaps it was, and is, naive to hope that a small SUV can really show its best side on a country B-road. On an empty motorway, I found myself glancing round the airy, bright cabin (which is wearing well at 9000 miles), relaxing and smiling (lots).

I'm not sure how much of an issue the following gripe about the Evoque would be to Evoque owners, as opposed to journalists that write about cars.

You see, the Bluetooth in the Evoque can have only three phones stored in its system. This seems an inconveniently small amount of phones because we are in and out of each other's cars all the time.

If you are the only driver of your Evoque, then this obviously isn't an issue, but I'd be keen to know if the car-buying public regularly hook up more than three phones into a car's Bluetooth. Let me know via the email address below.

Summer is upon us - the time of year when Mrs Mac and I try to put our National Trust cards to good use and get a little light exercise walking around some (usually deceased) wealthy person's back garden.

Thing is, most stately homes have gravel driveways but grass car parks - and the great British climate has been turning many of them into mud.

We haven't quite had to tow out any of the Trust's more elderly members just yet - but in general, the poor weather has made me appreciate the Evoque's four-wheel drive system.

It feels safe and secure; I totally understand why families choose Land Rovers (Freelanders and Discoverys, mainly) as their everyday transport.

The Range Rover Evoque is a bit of a mixed blessing in town.

Good bits? No doubt that the driving position offers excellent visibility and, of course, you get a disproportionate time to look at the classy interior; our long-termers light-coloured dash, tan leather and full-length glass roof gives it the best Evoque cabin Ive yet seen.

It also has a brilliantly supple urban ride quality. I live on a street with some pretty gnarly road surfaces, which you feel even in our 3 Series Sport or Mercedes CLS, but its far less jolting in the Range Rover.

The Evoque's urban weaknesses are definitely connected to the 2.2-litre diesel and optional 6-speed auto box of our car, though. It feels too sluggish when pulling out of junctions and the diesel clatter never really goes away.

I cant quite understand why it doesnt have stop-start and an 8-speed gearbox fitted, when its sister car the Jaguar XF does. It would do wonders for fuel economy in and out of town, Im sure.