* Get connected to MP3 and Bluetooth technology * We test and rate seven headunits * Find the best and worst value units for your car... 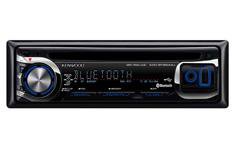 Overall
The Kenwood is a good all-rounder that's strong value on value, too.

Click here for a larger photo of the Kenwood KDC-BT6544U

Performance
Making calls is fiddly, because of the Kenwood's tiny 'phone' button, positioned to the left of the volume knob. The whole Bluetooth system is a bit slow, too, and the controls aren't at all intuitive. The music side of things is much better, thankfully, and sound quality is good when listening to CDs, MP3s or the radio.

Ease of installation/operation
Simple to install, because there's no separate iPod connector to route into the glovebox, and the microphone is integrated within the headunit. Pairing the unit with your Bluetooth phone is child's play, but navigating the Kenwood's menus using the buttons and knobs on the front (rather than the remote control) is fiddly.

Quality
The shiny plastics look a tad tacky, but the buttons and volume control feel solid and nicely weighted. However, the screen is small, and the odd font makes it difficult to read the text. Not bad for the price, but not top of the pile, either.

Special features
The Kenwood has both a USB and an auxiliary connection on the front. Plug your iPod into the USB port (using the charging lead) and you can skip between songs while your iPod is charging. It even works seamlessly with the latest iPhone 3G.