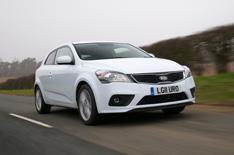 Kia has launched a new flagship model for its Proceed range.

The Proceed 4 comes with an uprated 126bhp version of the 1.6-litre diesel engine thats used in other versions of the car.

Its capable of hitting 60mph in just over 10 seconds, about a second quicker than the 114bhp models. However, theres no penalty in economy or emissions, because it averages the same 62.8mpg and emits the 119g/km CO2 of the less powerful units.

Standard equipment on the new car includes 17-inch alloys, tinted glass, full black leather upholstery and cruise control with steering wheel-mounted controls. For the first time in the range, sat-nav is also standard in this case, a fully integrated system with a seven-inch touch-screen and Bluetooth.