More for you |
Most and least reliable family carsWhat to do if you put the wrong fuel in your carVolkswagen Passat GTE long-term test reviewNew issue of What Car? magazine on sale nowTrue MPG: most efficient SUVs
Home
News
Kia
news 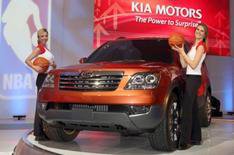 As well as launching the Borrego 4x4, Kia delighted the home crowd by announcing it was going to sponsor the NBA basketball league.

Celebrating this fact, a basketball hoop was wheeled onto the stage and several former legends of the game came out to play.

Even if you didn't know the game, you couldn't help but understand you were in the presence of sporting icons, as a booming announcement outlined the stars' career credentials.

As some eye-catching young ladies threw Kia-branded headbands into the crowd, the locals whooped with delight at the prospect of watching the old hands throw some hoops.

Up they stepped and, one by one, they missed.

At the conclusion of this slightly embarrassing episode, the basketballs were signed and thrown to the crowd.

But even the man from Kia had to concede: 'After that performance, they're not going to be worth much on eBay.'