* Are car electronics causing crashes? * Scientists believe they are * We explore the risk... 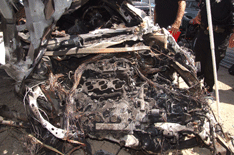 Last August, off-duty California highway patrolman Mark Saylor was driving a hired Lexus when it suddenly accelerated, reaching speeds of up to 120mph. There is a chilling recording of an emergency call made by one of the cars passengers as it sped out of control. The words our accelerator is stuck theres no brakes hold on and pray are heard just before the Lexus crashed and caught fire. All four occupants were killed.

Runaway cars
It wasnt the first report in America of a runaway car, or even of a runaway car made by the Toyota/Lexus group. Nor was it the last. The Saylor crash was the most high-profile incident, though, and was part of a chain of events that led the worlds largest car company to recall 8.5 million vehicles for safety checks, and apologise in front of US administrators.

The majority of the recalls were in America, and the fix involved replacing mats in some cars and the accelerator pedal, which some owners had reported getting sticky, in others.

However, there is a growing body of expert opinion that believes interference with cars increasingly complex electronics is the real cause of sudden, unintended acceleration, and that Toyota is just the latest company to be afflicted. Steve Wozniak, co-founder of the Apple empire, claims to have experienced the problem, and to be able to replicate it. Toyota refutes these claims that electronics could be at fault.

Modern cars have to provide increasing levels of performance, safety, comfort and luxury while meeting more stringent emissions and fuel consumption criteria. As a result, several functions previously controlled mechanically are now managed by electronics. It is not uncommon for drive-by-wire systems to control the throttle, automatic gearshifts and the steerings power assistance as well as things such as automatic cruise control. In effect, the driver sends requests to an on-board computer the cars electronic control unit (ECU) which then regulates how the car operates.

This Lexus sped out of control, then crashed and burst into flames. All on board diedUnwanted interference
The trouble is, experts believe, electronic systems are prone to interference from outside sources such as mobile phones or radio transmitters, or from software bugs or faulty circuits. Dirt, moisture and extremes of temperature can also have an effect.

Keith Armstrong, a British electronics specialist who has been consulted by Americas National Highway Traffic Safety Administration (NHTSA) over the recent Toyota cases, believes electronic interference is the most likely cause of sudden, unintended acceleration. Car manufacturers deny this and argue that slipping floor mats, sticky pedals or driver error hitting the accelerator instead of the brake in panic are the common causes. Armstrong scoffs at this: In the past, when a horse took fright and bolted, you didnt blame the rider for the horses brain going wrong.

In March this year, Armstrong and two other British electronics experts, Antony Anderson and Brian Kirk, staged a briefing at the National Press Centre in Washington to argue their case. Armstrong gave a presentation entitled Sudden Acceleration Its the Electronics. I took all the motor industrys arguments and shot them down one by one, he says.

Insufficient testing procedures
Armstrong claims the car industrys testing procedures and back-up systems are insufficient to prevent or deal with cases of sudden, unintended acceleration, and are way behind those required for aircraft. Planes have three or four microprocessor systems designed by independent teams who have never met and often work in different countries, he says. Surely cars need higher standards of safety than aircraft? There are many more people exposed and they are less well trained.

After an incident it is impossible to pinpoint the cause because there will be no record in the cars electronics system of anything having happened, he adds. Electricity doesnt leave a trace unless there is some extreme event. The cars black box recorder will be of no help, Armstrong says, because it takes its signals from the ECU, and this will show only that there was a case of sudden acceleration, not why.

So why dont drivers faced with sudden, unintended acceleration just brake or take the car out of gear? Armstrong says it is difficult, if not impossible, to stop a car with its throttle stuck open, and points to an NHTSA report from 2008 that concluded it takes up to five times the normal braking force and five times the usual stopping distance to bring a runaway to a halt. To exert that kind of force, Armstrong says, the driver would have to tug on the steering wheel so hard that he or she would have no spare capacity to push the ignition-off button or shift the transmission lever into neutral.