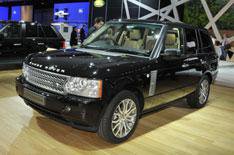 Luxury is the watchword at Land Rover, where a new Range Rover edition has been launched to coincide with the British Motor Show.

The TDV8 Autobiography has leather-covering everything, from the dashboard and seats to the door bins, centre console and door casings. Even the floor mats are edged in leather.

A television and sat-nav system will also be standard, along with 20-inch diamond-cut alloy wheels.

All this comes at a cost: the Autobiography costs 16,995 more than the entry-level Range Rover TDV8, with prices starting from 72,995.

Other cars from the existing range will also be on show, all featuring 2009 updates such as new wheel styles, new exterior colours and optional wood and leather heated steering wheels.

LRX
Originally revealed last year, the Land Rover LRX concept car is also on display. Billed as a clean 4x4, it hasnt been confirmed for production yet, but company insiders say it is almost certain to be on sale in less than 12 months.