5. Mazda 3 with 8.8in colour display and  Mazda Connect 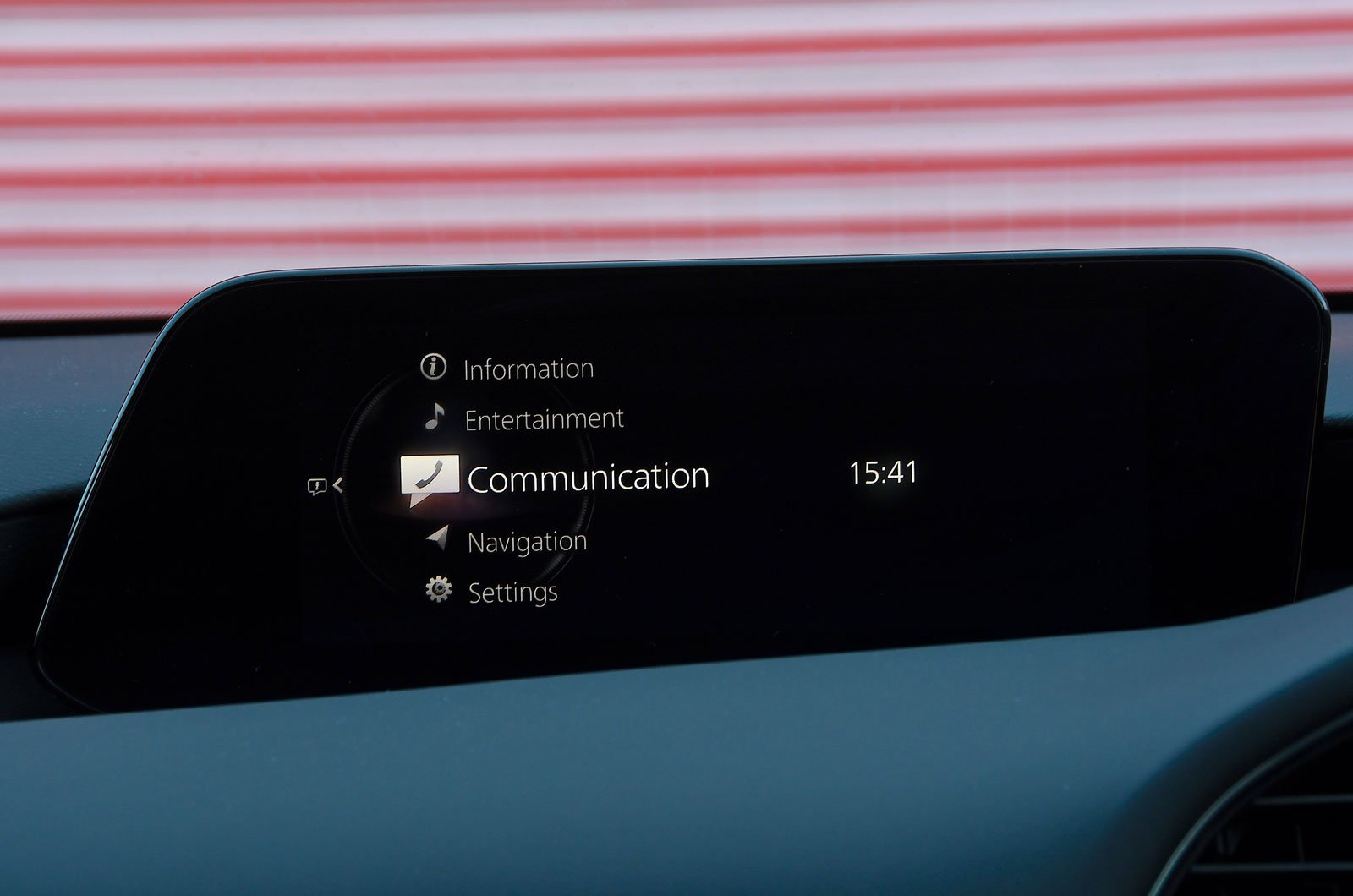 Instead of a touchscreen, the Mazda has a rotary controller between the front seats for accessing the infotainment, backed up by shortcut buttons to the key menus. This allows the screen to be placed higher on the dashboard, near your line of sight – although the screen is quite shallow. Plus, you just have to twist the dial to zoom in or out and click it twice to cancel guidance.

Radio stations are grouped in ensembles rather than alphabetically, but the combination of the rotary controller and high-set screen minimises distraction. You can also change stations using voice control, but this isn’t foolproof.

The voice control is better when asked to find fuel stations, coming up with a list and letting you select one verbally.

There’s a dial for temperature and buttons for the fan; these are easy to reach and use. 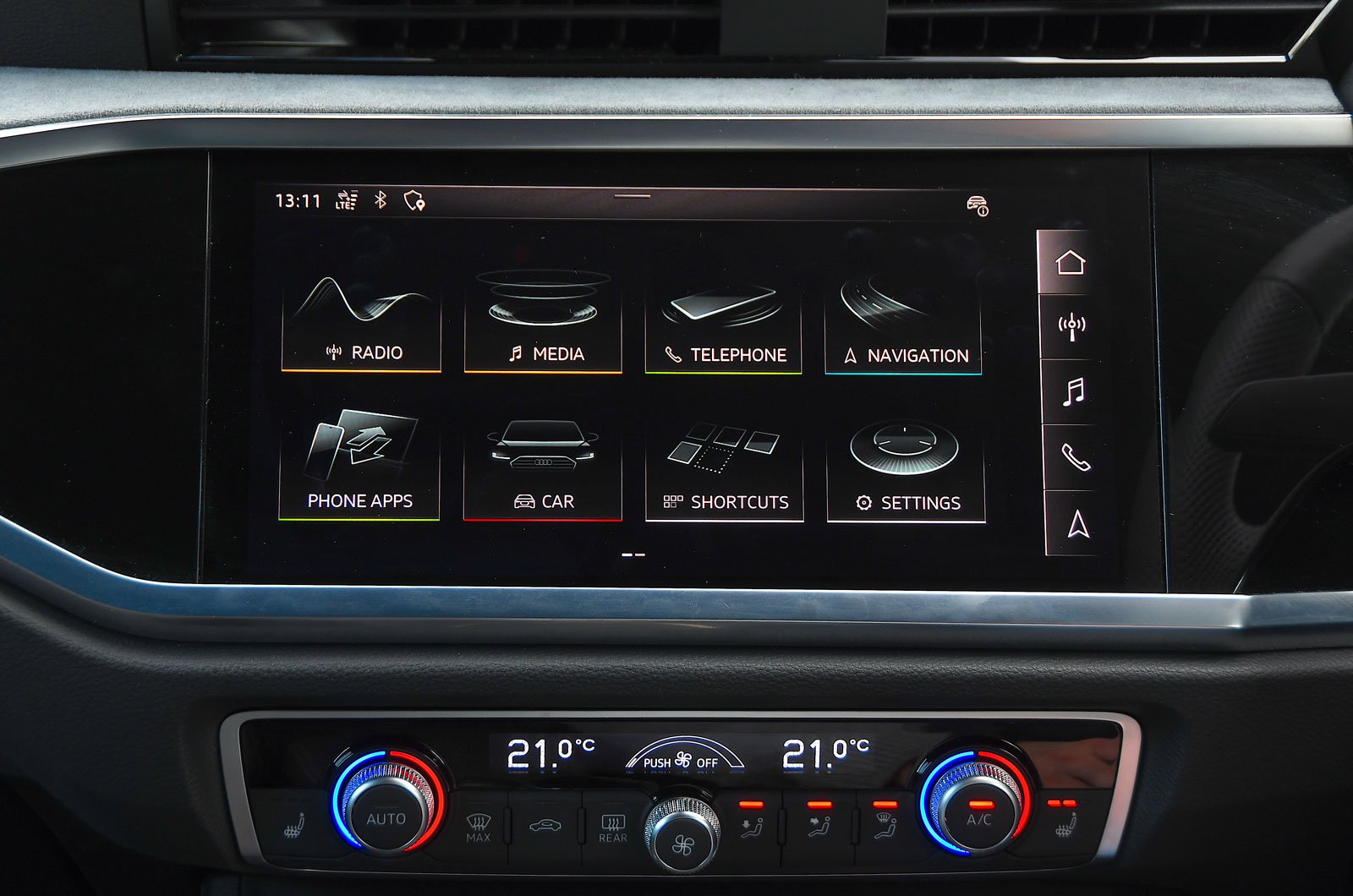 This is probably the most responsive touchscreen system around, so the map zooms in and out quickly and smoothly. There’s also an overview icon on the screen for when you want to see the whole of your route. Alternatively, you can zoom using a steering wheel controller, and a press of one icon ends route guidance.

Changing radio stations on the touchscreen isn’t as easy, because there isn’t a handy scrollbar at the side, but you can use the steering wheel controller to do this. You can even change radio stations using voice control, with this working well.

The voice control understands natural speech and lets you choose an option at any time instead of forcing you to wait until it’s finished listing options. The only slight niggle is that you need to say “line one” instead
of just “one” when selecting a radio or service station.

Save money on an Audi Q3 Sportback with What Car? >>

3. Porsche Panamera E-Hybrid with Connect Plus and Porsche Communication Management 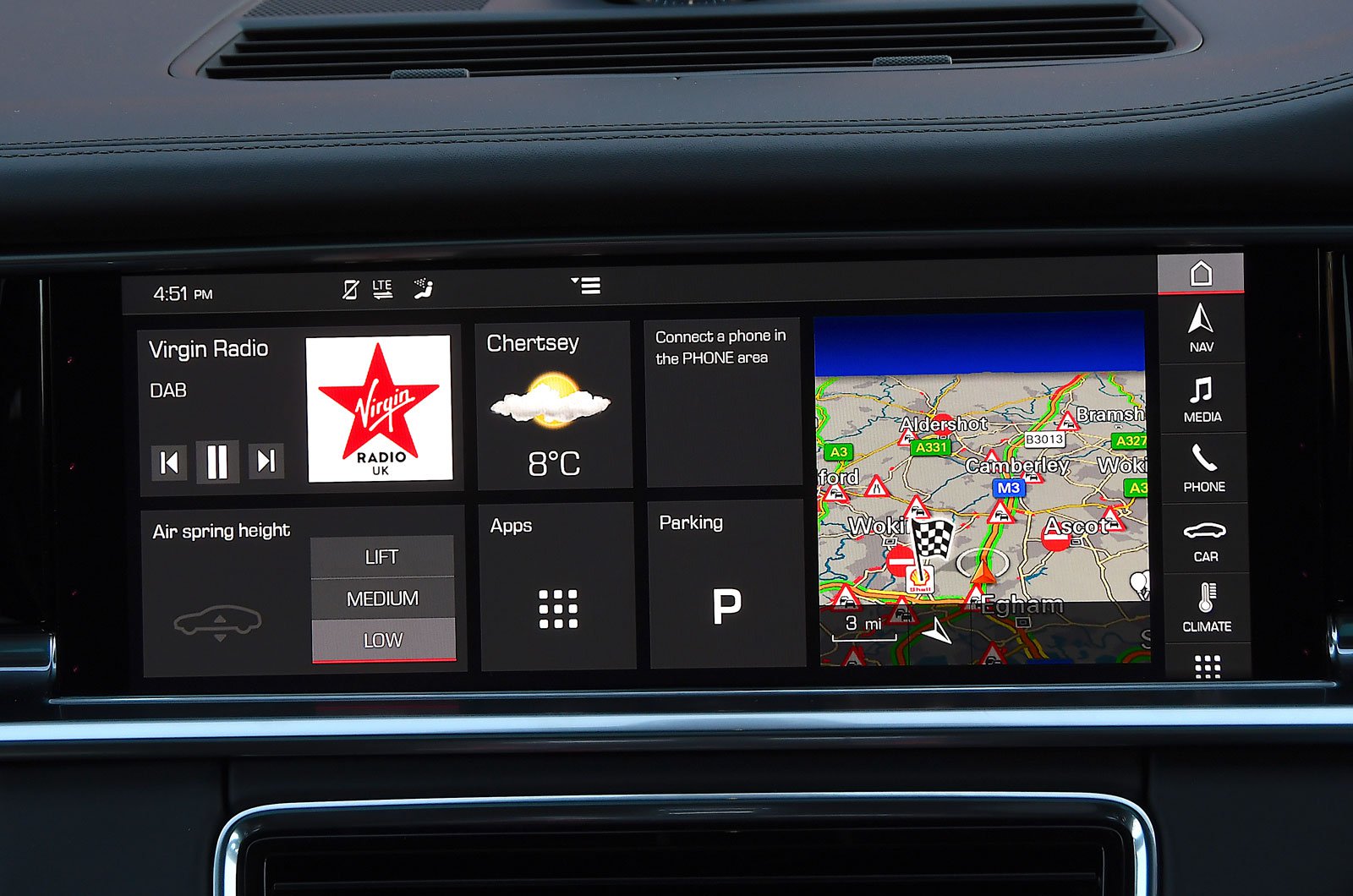 The two toggle switches for the heating on the centre console are really easy to use. What’s more, the infotainment touchscreen is very quick to respond to inputs, while you press a single icon to end guidance and you can zoom out on the sat-nav map with your fingers or by using a user-friendly dial below the screen.

Sadly, while the screen itself is large and quick to respond, shorter drivers have to stretch to reach the top left corner. And some of the icons are difficult to hit accurately; for example, when searching for a radio station, you can select the letter of the alphabet it starts with from a pop-up menu to reduce scrolling, but this is tiny.

The voice control system understands natural speech and will provide a list when you ask for nearby service stations. You then simply tell it the number of the one you want.

Save money on a Porsche Panamera with What Car? >>

2. Mercedes-Benz CLA with 10.25in touchscreen 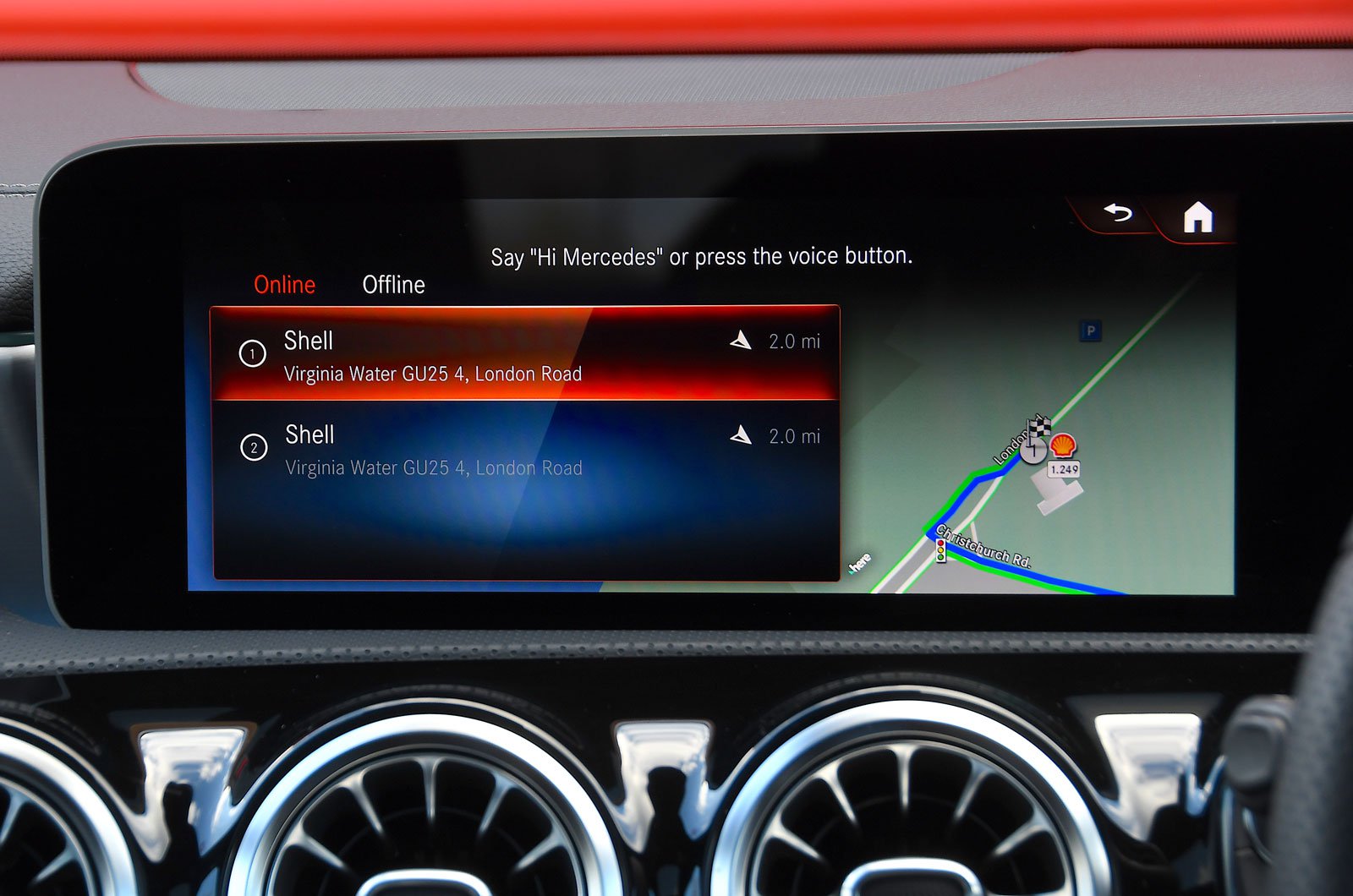 If you want to zoom in and out on the map, you can use a large touchpad between the front seats, a smaller one on the steering wheel or the touchscreen itself. The latter is a bit fiddly to use on the move (although great when stationary), but the user-friendly touchpads solve the problem. Cancelling route guidance can be done via all three interfaces and requires a single action.

Scrolling through the radio station list takes an age, but you can use voice control to get around this problem. The voice control system is really good at understanding speech and is activated by you saying “Hey Mercedes”. Among other things, it will provide a list of service stations, and you can choose one verbally.

Save money on a Mercedes CLA with What Car? >> 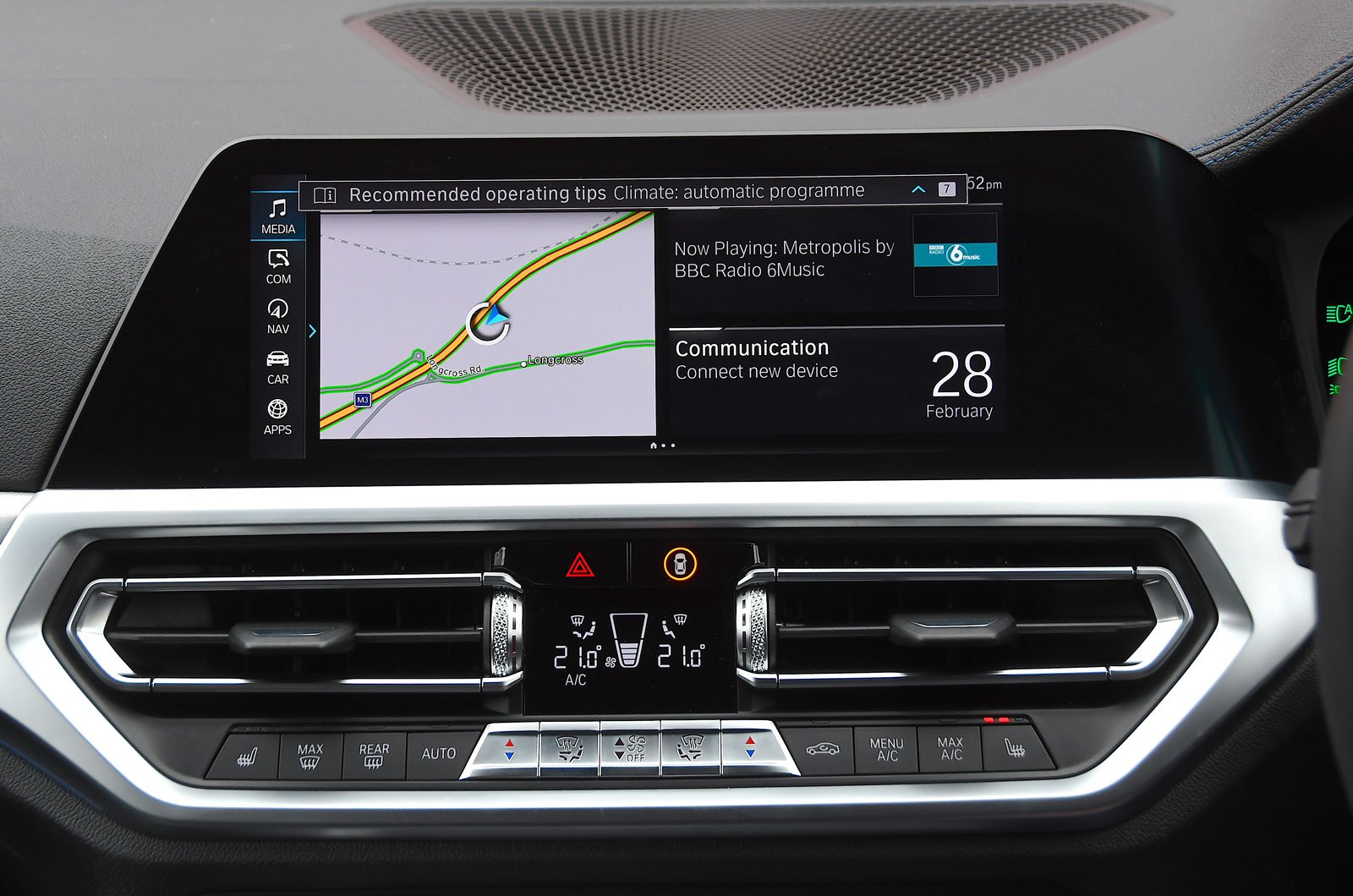 The 3 Series has small buttons for temperature and fan control that aren’t quite as easy to use as knobs, but in pretty much every other respect, it sets the standard.

As in the Mazda 3, you access the infotainment by turning and depressing a large control dial between the front seats that’s surrounded by handy shortcut buttons. Zooming in and out is done by twisting the dial, or you can use pinch and swipe actions on the screen itself – preferably when the car is stationary. Ending guidance, meanwhile, requires just one click or touch.

One of the shortcut buttons takes you to the main radio menu, then the control dial lets you quickly scroll up and down the list. Voice control also works well for changing stations. This is activated either by pressing a button or saying “Hey BMW” and recognises natural speech.