More for you |
What Car?'s top 10 used electric cars (and the one to avoid)10 most unreliable SUVsWhat Car?'s best cars for less than £250 per monthGuaranteed discounts on our 2020 Award winners - save up to £19,366Skoda Kamiq long-term test review
Home
News
Mazda reveals Furai road racer
news

* Track-day special will be at Detroit motor show * Powered by 450bhp triple-rotary engine * See the new Mazda RX-8 from Sunday... 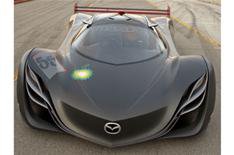 Mazda has ramped up the pre-Detroit motor show excitement by releasing early images of its Furai concept car.

Although it is road-legal, the Furai is based around the Courage C65 racing chassis that competes in America. As a result, it is expected to be sold to customers who want to drive it on racetracks.

The two-seater is powered by a 450bhp triple-rotor rotary engine that will run on bioethanol or synthetic alcohols.

Aerodynamic features such as a front air splitter, rear diffuser and special headlamp trims create downforce that stick the car to the road, while the car's sculpted bodywork helps achieve a top speed of 180mph.

The Furai is also said to incorporate some of the styling that will be present on future Mazda models.

Mazda will also unveil its new RX-8, scheduled to go on sale in mid-2009, during the Detroit motor show, which begins this Sunday.