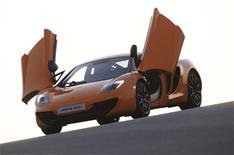 That puts it into the same price bracket as the Aston Martin DBS and Ferrari 458, but McLaren is proud of the fact that, unlike the competition, its car comes with a carbon chassis, as well as the combination of 592bhp and sub-300g/km CO2 emissions.

Cost options
Although 168,500 is the basic price, customers can specify a wide range of options to personalize their car, and the prices for these will be confirmed when the car is launched.

There are 17 exterior paint finishes available including the McLaren Orange made famous by the companys racing cars in the 1960s and '70s as well as the choice of 14 interior trims.?

The 'standard' 12C features just one piece of carbon the MonoCell but carbonfibre options will include mirror casings, engine-bay panels and engine cover. Pricing for these options will be confirmed at launch.??

The use of such lightweight construction for the cars chassis which the company says allows for excellent performance, cabin space and efficiency comes 30 years after the company pioneered its use in Formula One. It also follows its use in the Mercedes-Benz SLR McLaren, which (as the MP4-12C will be) was built at McLaren's headquarters.

Where to buy one
The car the first pure McLaren road car, with every component specifically deisgned for it will go on sale in spring 2011, initially through three UK showrooms in London, Birmingham and Manchester.??

The 12C is the first in a range of cars to be produced by McLaren, and up to 1000 are expected to be built in the first year of production. Eventually, the company plans to build around 4000 cars annually.

McLaren MP4-12C Reader Test Team video
To see what our readers think of the Ferrari 458 Italia-rival, take a look at the video below.